King of the Nogs 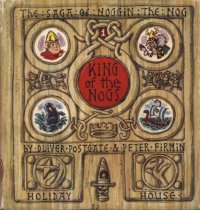 The first tale in the saga of Noggin the Nog, King of the Nogs opens with the land grieving as King Knut, Noggin's father, passes away.  In order to ascend to the throne, Noggin must find himself a wife.  Over the next 7 days, a group of excited maidens from all over the lands assemble at Noggin's castle hoping to be chosen.  However, despite their beauty, none of them are right for the new King.  As Noggin reaches the end of the assembled maidens, he comes across a large green bird who introduces himself as Graculus.  Graculus explains that he has been sent by his master, Nan of the Nooks, and presents Noggin with a carved knife.   On the blade of the knife is carved the face of Nan's daughter, Nooka, who Noggin instantly falls for and proclaims that he shall marry.

A great ship is built and a crew of warriors assembled, and Noggin sets out for the land of the Midnight Sun to seek his intended.  However, as Noggin's subjects wave him off, Noggin's wicked uncle, Nogbad the Bad, smiles to himself.  He knows that Noggin's journey will be full of perils, and should Noggin fail to return, the throne will be his!

Great storms batter the boat, and eventually the crew become lost.  Sighting a small island, Thor Nogson gallantly sets foot on it, only to discover it to be the back of a gigantic walrus, in fact none other than Arup, King of the Walruses.  In exchange for copious amounts of ship's biscuits, Arup tows the ship to the land of the Midnight Sun, where Noggin and his crew are greeted by Nan of the Nooks.  Noggin asks Nan for his daughter's hand in marriage, to which Nan agrees (after checking with Nooka!).   After a wedding and great celebration, Noggin and his crew set sail for home accompanied by his new wife.  Graculus flies on ahead to tell the news of the wedding to prevent Nogbad from seizing the throne.

Graculus arrives home exhausted, and perches on a flagpole to sleep before telling the news.  Unfortunately, he chooses the flagpole of the black castle of Nogbad.   Nogbad quickly takes Graculus prisoner and casts him into his dungeon.  As Nogbad sets off to declare himself king to the council of elders, Graculus passes one of his green feathers to a robin and instructs him to take it to Queen Grunhilda and tell her of his predicament.  The Queen immediately instructs her guards to rescue Graculus and sets off to challenge Nogbad.  As she confronts Nogbad in front of the council of elders, Noggin's ship is sighted approaching the harbour.  Noggin returns to his people, and he and Nooka are crowned King and Queen of the Nogs.  In all the excitement, Nogbad sneaks off to stay with his granny in Finland.